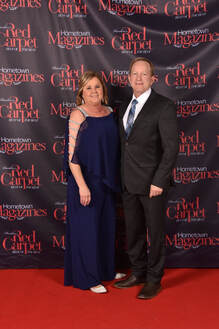 Aubrey and Debbie Pridgen
Debbie's Testimony
As a child, I was loud, talkative, hyper and had to be the center of attention.  I got a spanking every Sunday for "showing out" in church.  I was very rebellious and did some very stupid things.  Growing up, I was a defender of the underdog.  I had a boldness about me even in my early teens.  My motto was the bigger they are, the harder they fall.  As crazy as it sounds that particular reputation has stayed with me to this day.  Even though I was raised in church all of my childhood/teenage years, I realized at an early age, I believed I could not be good.  There was no chance I would make it into Heaven.  I left my parents' home at 17, my senior year of high school.  I moved to Jackson to live with my grandmother because my dad and I could not get along.  That was truly the beginning of my road of bad life choices.  I spent my senior year traveling from Jackson to Crystal Springs to finish school.  At this point, I was introduced to alcohol for the first time.

Soon after graduation, I married my first husband. We were married a year when my beautiful daughter Erin was born.  After not speaking to my parents for two years, God used the birth of my child to bring restoration between us.  Two weeks after she was born, we discovered she had a heart problem.  I was young and scared of this sick baby.  During the next two years, I made some very bad choices including cheating on my husband and not being the mother that I should have been.  I got divorced at age 21 and the downward spiral continued.  For the next three years my life revolved around alcohol, sex, drugs and rock n roll.  I moved back to Jackson, started working as a waitress, and began running with the wrong crowd.  I started an on again off again dating relationship with the man who would later become my second husband.  I had met some girls that I started hanging out with after work.  They were determined that they had the perfect guy for me.  They took me to the Redwood Inn Restaurant and introduced me to a blond hair blue eyed Aubrey Pridgen (his family owned the restaurant).  We began what I thought was the perfect relationship, "friends with benefits." We both lead our own lives and got together when we wanted.  This went on for a few years until I got busted by the other guy.  I said goodbye and walked out of Aubrey's restaurant.

I married my second husband and had my second beautiful baby girl Megan.  This was a very rocky marriage due to more really crazy decisions.  I actually went to church a little bit but at the end of that marriage I still did not have a relationship with Jesus.  My life became the same song third verse.  I met a  really great guy who really loved my daughters.  He was so good to them and he was like a father figure in their lives.  I figured marrying him would give my girls some stability and security.  That marriage lasted seven years.  During this time, I did get back into church and went faithfully for about four years.  As my marriage started to crumble, I got out of church.  I remember thinking I am such a failure, my daughters deserve so much better than me.  I have shamed and embarrassed my family.  I began to think about killing myself.  One night while lying in bed, I started seeing my girls' faces and I heard a voice say "why would you want to leave these beautiful girls?" I began to look at things in a different light at that point.

In December 1998, my oldest daughter was about to graduate from the youth challenge program.  To celebrate I allowed her to pick a restaurant to take her to dinner.  Of all the places she remembered the Redwood Inn restaurant.  When we arrived, I saw Aubrey and his seven year old son.  We were reunited after 13 years.  We dated for two and a half years then moved in together for a year.  We started going to church at Crossgates United Methodist Church where Pastor James Twiner convinced Aubrey to marry me instead of just living together.  We got married May 2, 2002.
I can truly say Aubrey is not the one who made my life change or the one who made me happy.  I had to surrender my life and will to God and get happy with myself.  I learned to like the person God created instead of continually trying to destroy her.  When I surrendered to God, He gave me my soul mate, the absolute love of my life.  Even though we have had some ups and downs, God has been at the top of this marriage.  Now I seek God instead of a divorce attorney.